Okay. So I'm actually trembling while I write this post, because it's such a big reveal. And it's not even the first time I've revealed it. I published it as a story in my book, The Year of the Bird, a couple of years ago. Even so, calling attention to it, on its own, makes me shake. But if not now – at a time when it's so much part of the public conversation that it's got its own hashtag – when? So. For whatever it's worth, for anyone it can help, here it is.

I saw him yesterday, for the first time in almost nine years.

He’s heavier now and red-faced. He doesn’t seem to be wearing his teeth anymore. His neck is thick, his cheeks sag, his mouth is sunken. And the expression on his broad face is as dark as ever.

Strangely, his voice has changed into a version of his father’s voice,
minus his father’s hearty tone. After all those years dominated by his voice, I wouldn’t recognize it now.

His elderly cousin, Phyllis, says to me, “I think he would have been all right if he hadn’t fried his brain. You just have to talk to him for five minutes to know he’s not all there.”

The thing, finally, about having been a battered wife, is that you can never escape the shame, the implication of complicity, the “she must have liked it… she must have needed it somehow,” like the rape victim who wore a skimpy dress into a dark alley.

I haven’t lived with him for almost thirteen years, after being married to
him for more than twenty. I saw him a few times in court while I was divorcing him and once more at our daughter’s wedding and not again until yesterday, at his father’s funeral.

I’ve made a mistake, I keep thinking, driving to the cemetery through the cold rain with our daughter Jenny and grandson Kevin, who’s reading a book in the back seat. “A hundred and sixty-three pages,” he says.

I shouldn’t be here.

Jenny says, “You shouldn’t let him scare you away.”

The night before, in bed, George said, “I don’t understand. Why are you going if it makes you feel so bad?”

I tell him, I don’t want to stay away out of fear.

So I choose my clothes and get my hair blow-dried straight and remember to drink plenty of water.

We find our way to the cemetery on time. Walking into the military chapel, all three of us try to squeeze under one umbrella, and we get the giggles. But not for long, not after we pass the sentries lined up out front in the rain and through the doors.

Then I see him for the first time in almost nine years.

When we were married, there were hardly any days, after the first few years, when he didn’t spend some hours yelling at me.

Sometimes first thing in the morning, sometimes in the middle of the night, tearing the covers off me and making me stand and listen to him until he was satisfied with the authenticity of my contrition for whatever had made him mad.

You’d never put up with that?

After the funeral, I pick George up from work, and we drive forty-five minutes through the rain to the wake, at my ex-sister-in-law’s house. George and I are kidding around a little as we walk down the driveway. Three smokers are standing in the darkness outside the front door. I recognize two of them and smile hello and smile at the third, just another face in the dark.

I hear George, a couple of steps behind me, greet him, as I step inside.

I can see him out of the corner of my eye, while I talk to people I’m glad to see, to stand in front of—uncoupled from him.

At one point, his sister asks me if I know where Jenny is. When I find her, she’s standing in the darkened entryway, talking with him. I don’t want to be the one to interrupt, and I start to walk around them.

“I brought this for you,” he says, handing me a set of wood and cork coasters.

“Don’t you remember them?” he asks.

“They were your grandparents’,” he says, advancing toward me, his narrow eyes on mine.

“I don’t remember them. But thank you.”

And I walk away.

How not-nice of me, right? A conciliatory gesture on his part, and if it was kind of pathetic—the wooden coaster stand held together with a red rubber band—didn’t that make it more important to respond kindly?
Not numbly. Not turning my back on him.

Maybe Eleanor Roosevelt would’ve been kind to him. Maybe you would. As for me, I can’t bear to talk to him. I feel menace and accusation and manipulation, and I turn away.

Is this the way it will always be? Is this as far as I’m going to get? Will I be trying to escape from him, yelling at him, “I don’t love you anymore,” in my dreams for the rest of my life? Will I always be afraid of him?

Even standing in his sister’s living room, smiling, being smiled at, George there with me, I feel that just those things—just our smiling presence—might rouse the beast to avenge our intrusion.

And behind that fear, huddling in a dark corner in the back of the cave,
is that old feeling that I’ve brought it on myself. That I shouldn’t have come. That I was wrong to presume. That our presence is an insult to him,
an invasion of his space.

That, at the very least, for God’s sake, if I’m going to be there, I should be nice to him.

Or is it just more of the tired old same?

Am I ever going to get past this point? Earlier today I thought about those mediation programs in prisons, where victims are brought together
with the criminals who did them harm. Because—wasn’t I the victim?

Yes—responsibility, self-determination, choice, I know. I agree. It’s the way I’ve always told this story. Who wants to be a victim?

Yelled at, threatened, mortified, frightened, lied to, intimidated, shoved, bruised, knocked down, deprived of sleep. Checkbook confiscated, car keys taken, birthday presents thrown in the trash. No offense too obscure to rage about: vitamins I forgot to take, crumbs left on the table, onions not sliced small enough. I complained, I cried, I apologized, I denied the obvious. I stayed. Long.

I’m the victim. This is progress?

I don’t like the way it sounds. Poor me, like that. But what if I’d been robbed? Is it shameful to say you’re a victim of robbery? Even if maybe you could have done something to avoid it—not stopped at the ATM after dark, moved to a better part of town, whatever—the robber is still the one who gets arrested. Not you.

So George says, “What would you ask him if you met with him? Would you want to find out why he did those things to you?”

What? No. I wouldn’t ask him anything.

I wouldn’t want him to say anything at all, for once. He’s the one, after all, don’t forget, who never yielded the floor, who never shut up, the one who yelled for hours. Yes, hours. I want to be the one to talk this time.

But what would it help to say?

You hurt me. You were mean to me. You lied to me. You scared me. You took advantage of my insecurity and my conscience. You humiliated me in front of everybody. You stole my money. You were drunk and raging and broke things and screamed at me in the night. You threatened to leave me by the side of the road. You told me I was ugly. You told me I was dumb.

I don’t care if you’re screwed up. I don’t care what your mother did to you when you were young or how long your father was away from home.

Stop taking it out on me.

You were wrong to take it out on me.

You hurt me. It still hurts.

And coasters? If they belonged to my grandparents, what were you doing with them anyway? So you’re giving back something you took from me?

Big deal. That’s nothing. You took twenty years from me. You took my trust and my affection and my youthful hopes and my multitudinous apologies and my countless turns of the other cheek and my forgiveness and my trying again, again.

Thief. You stole all my feeling for you, all my sympathy, threw them
all away, drove them into a ditch. And I still feel damaged, still bruised. I’m still scared. I’m still mad.

I wish you knew what you did. I wish you would tell everyone how wrong you were, how sorry you are.

I wish that I could look at you and feel, “Okay, I’m myself, you’re you, whatever it is that you are. You’re not a part of me, anymore.”

And I wish you would sprout white flapping wings and fly away from my heart and rain down good-bye blessings as you disappear at last into the cloudy gray sky. 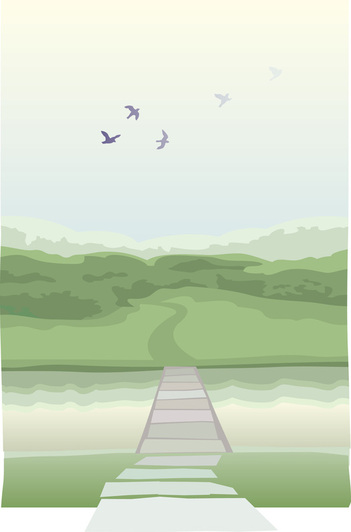 All material © Copyright Susan Spangler. All rights reserved. Not for use without permission.